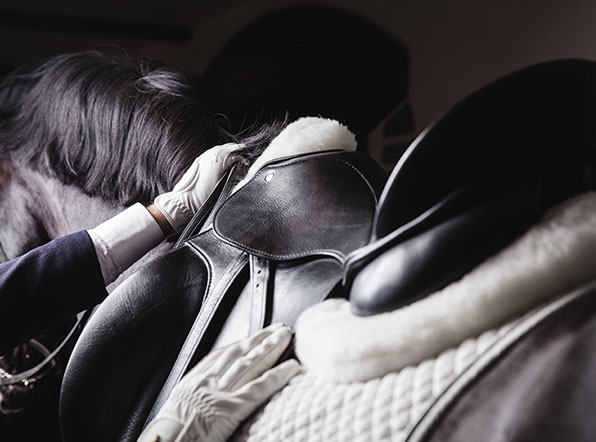 Every day I am amazed at how the Magna Wave PEMF can change and help the people and animals I work on. But one particular instance will always stand at the forefront of success stories for me. One of my own show horses, a young Arabian stallion that competes in the saddleseat division, had been having issues with his head and neck. His issue would occur randomly and at random times, but usually during his training. He would slam his left ear into his neck and throw his head down and to the right, as if a bug had flown down his ear. This went on for a while, but only once every couple months. After a few years it continually got worse to the point it was happening almost daily and he was much more agitated by it. He is a kind and stoic horse, not one to be a wimp or have an attitude, so we had the vet out to check his ear and head. The vet scoped his ear to check for a possible tumor in the canal as well as general palpations around his head and face. The only place he could get any reaction was forward of the left ear near the temple, and the only suggestion they had was that we may pursue an MRI to check for a tumor or other abnormality in the skull or neck. Not something in my budget, I was thinking to possible retire him from showing as he didn’t seem that have issues when not working and I was concerned about the fact he was in so much pain.

In a last-ditch effort, we had a chiropractor look at him. He had a few vertebrae in his poll out of alignment and his jaw had a lot of tension, especially in the left side. After the adjustment, he was much better for about 3-4 weeks, and then symptoms started returning to their daily frequency. At one show I was attending, there was a Magna Wave PEMF Practitioner (I had heard good things about the PEMF therapy), so I tracked her down and had my horse worked on. He was again, much better and it helped the second adjustment last longer. I was so happy that something was helping him!!!
So about 8 months later I looked into purchasing a Magna Wave PEMF machine and getting certified. Long story short, I got my certification and machine and promptly went to work on my boy. I worked on his poll, jaw, and down his neck every other day for a couple weeks. After the first two PEMF treatments, he was no longer throwing his head. Since those first few weeks, I generally go over those areas about once a week or so and he has not had a problem since. Not only has Magna Wave PEMF saved his career, he is also working in every way like a totally different horse. He is happier, his job seems easier, his flexibility has improved, and his overall balance and cadence while working is 100% different! I still can’t believe the changes in a couple months on a horse I had broke, trained, and showed for 5 years. After watching the changes the Magna Wave PEMF therapy had on him, I am even more proud to be a part of the community and help other people see the same success with themselves, their horses, and their smaller pets!