What is Hydro Wave?

To understand Hydro Wave you must first be familiar with “colloidal silver”. Many people have heard of the benefits of colloidal silver as a topical, anti-bacterial product. However, colloidal silver has no oxygen value, and drinking it may cause Argyria (blueing of the skin) due to its very high parts per million (ppm) of silver. Colloidal silver is not nano-sized and measures 20 to 500ppm. The silver in colloidal silver does not remain in suspension, which is why it must be shaken prior to use.
Magna Wave has discovered a superior product called Hydro Wave. While not related to silver colloids, Hydro Wave utilizes less than one ppm of silver, which is given a negative charge and bonded with oxygen molecules. The binding of oxygen to the nano-sized particles of silver holds the silver in permanent suspension. These silver/oxygen clusters are pulled towards positively charged pathogenic cells like north and south poles of a magnet. Lack of oxygen has been identified as a key driver in the start and spread of many diseases. Hydro Wave direct cellular infusion of active oxygen molecules is a safe and effective therapy, with only positive side effects. Since its discovery nearly 60 years ago, Hydro Wave has proven to be unlike any other known product! Be sure to watch all of our videos! If you like silver colloids, you’re going to LOVE Hydro Wave.

Hydro Wave comes in a concentrated form that can be mixed with your daily water. There is no taste to Hydro Wave so you can mix 2 ounces in a 16-ounce drink and not even notice it is there.

You can also add Hydro Wave in the water your animals drink, from pets to horses, Hydro Wave can help keep your four-legged family members healthy.
Magna Wave also sells Hydro Wave in spray bottles for wound care. From scraped knees to surgical wounds Hydro Wave allows the body to fight infections and heal quickly. Just like oral use, You can spray Hydro Wave on yourself, your children, and your animals.

How much Hydro Wave should I drink daily?

The recommendation is 2 ounces per day. In the morning drink 1/2 oz. (1TBSP) Hydro Wave concentrate, hold in mouth as long as you can; the longer the better, and then swallow. Repeat this 30 minutes after your last meal of the day. Daytime, put 1 oz. (2TBSP) in 20 oz. to 1 liter of clean, filtered water or spring water (non-distilled). Drink this throughout the day, in addition to your normal water intake. Repeat daily. Note: 1TBSP is 1/2 oz.

Can I use Hydro Wave on my skin?

What are some other uses of Hydro Wave?

Hydro Wave can be used with a nebulizer, for direct delivery into the lungs. Spraying in the nose and eyes can be helpful; as can dropping in the ear canal. Hydro Wave may also be used with an enema bag. Direct contact of the concentrated Hydro Wave to the affected area is highly recommended.

Can I drink Hydro Wave Water with food?

How long does it take for Hydro Wave to begin working?

Just like using a Magna Wave machine Hydro Wave results vary, Since we are all different, this question can not be answered directly. We have found the key to success with Hydro Wave is consistency.

Can I give Hydro Wave to my animal?

Absolutely. Animals’ cells need oxygen, too. We have many clients who have used Hydro Wave with their domestic animals, as well as equine, both internally and direct on skin lesions.

Is Hydro Wave the same as Colloidal Silver?

How much silver is in Hydro Wave?

Less than one part per million. 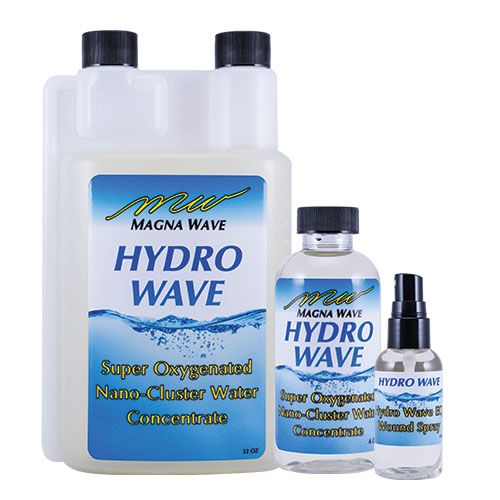 Does Hydro Wave cause Argyria (blue coloring of the skin)?

Can you refrigerate Hydro Wave?

Yes, however, Hydro Wave does not need to be refrigerated, but refrigeration will not harm it. Hydro Wave should not be frozen, boiled, or mixed with any liquid other than filtered or spring water. Do not add lemon, sweetener, or any other mixer with Hydro Wave

What is the shelf life of Hydro Wave?