Lewis and Sherry Paulk moved to a Weatherford ranch to start their passion of breeding cutting horses, but they didn’t expect to get what they’re now calling a miracle in January when their mare had a filly 62 days early. The Paulk’s new filly — Roosters Sannman Miracle “Sandi” — is now defying the odds at 15 days old. Sandi’s mother, Roosters Best Bet “Jazzy,” was due April 2 but had her on the cold night of Jan. 30.

“We got her into the barn and she was sitting up and breathing on her own, but I could tell that her legs didn’t look right so we were careful not to let her stand on them. She was pretty stable but we continued to dry her off and keep her warm so she wouldn’t get pneumonia with being so wet,” Sherry said. “Once the vet got there she looked at Sandi and said it was not what she was expecting to see. She said at 62 days early she should not have hair and not be breathing well, so she wanted to get her to the hospital and get her some antibiotics and fluids, and get momma checked out to see why she aborted the baby. The only thing we could think of was that [Jazzy] had an infection that she was passing to the baby and that will make them abort.” 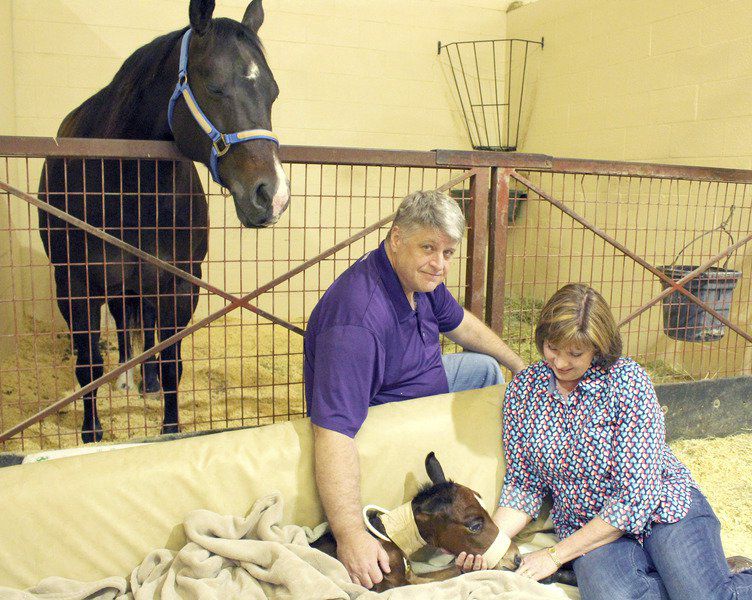 According to an article written by Kentucky Equine Research staff, the average length of pregnancy for mares is about 342 days, but can vary by a couple of weeks in either direction. Foals born fewer than 300 days into the pregnancy have a lower chance of survival, possibly as low as 10 percent. Sandi was born around day 280. Sherry wrapped Sandi in a warm blanket and took her to Weatherford Equine Medical Center where some tests were run. Lewis was out of the state when Sandi was born and once he heard the news immediately booked a flight to get home, and began praying.

“I promised God that I will give him credit when credit is due, I think he’s in the business of miracles and this is his miracle. My prayer was for God to save this little one if it was his will,” Lewis said. “I said I know it’s your will that we don’t put this baby down, but I need you to change the mind of the vets because they all said she needed to be put down and word-for-word — when [Sherry] asked for their recommendation — they said they had changed their mind.”

Dr. Heath Qualls, who specializes in internal medicine at Weatherford Equine Medical Center, said the lungs aren’t typically developed when a foal is born this early, but Sandi’s seemed to be in good shape.

“With prematurity, especially at 62 days premature, many don’t make it to the hospital or are even seen alive once it happens, so with her doing as well as she did was quite a surprise. There was most likely some type of special events going on in utero that caused her lungs to be that mature,” Qualls said. “I told the [Paulks] the problems are going to be her legs because those bones are fully formed yet, so that’s our biggest issue right now, and then the other complications that come with being down that long.”

Qualls said down the line when Sandi gets stronger, it will be harder to keep her lying down.

“It’s been a blessing that she’s almost making it up on her own, but we are able to keep her down. As she gets stronger and gains some more weight and muscle, it’s going to be harder to keep her down so we will have to probably get her into some kind of splint for her legs just to keep her weight distributed,” Qualls said. “I know Lewis talked about getting some kind of lift and I’m happy to try that and see if it works for her and the mare while trying to nurse.”

Qualls said Jazzy is doing quite well considering she’s been cooped up in a stall. Licensed RVT at Weatherford Equine Medical Center Damaris Hochanadel, who has 30 years of training at UC Davis Veterinary Medical Hospital in California, has been doing Sandi’s therapy on a daily basis.

“We’ve managed to avoid some of the pitfalls, but it’s just a matter of keeping her down until those bones harden,” Hochanadel said.

Hochanadel said Dr. Meghan Qualls, another veterinarian at the hospital, has been using an electrical bone stimulator called Magna Wave — a therapy that was built for NASA astronauts for bone density maintenance — to help Sandi’s legs.

“When we took [X-rays] of her coming in, it just looked like ghost bones. So when we took them [recently] you’re starting to see the definition, so she’s coming along,” Hochanadel said. “One of the big deals with horses lying down is the development of pneumonia, so she’s starting to get a little bit of a cough but that’s why I help her sit upright. The lungs are the last thing to develop, so it’s very important that I take care of that. She seems to be holding her own. The only other [premature foal] that I’ve ever seen did not go well at all — that was back in 2001 — but we did not have that bone density technology then so this is huge.”

Hochanadel said Sandi is also very cooperative with her therapy, which helps during the process.

“I do physical therapy on her front feet because she’s contracted because she’s going to have to have the bottom of her feet ready to be on the ground once those bones develop enough so she can stand, otherwise, we’re looking at a whole new set of problems,” Hochanadel said. “She’s a one-technician job for sure, but that’s what I use to do at UC Davis. The plan is to just keep all of the elements in front of us. The other day I dressed up in plastic, draped her over my lap and gave her a bath and she just sat there.”

Hochanadel said once her bones are developed and strong, then they won’t give out.

A GoFundMe account has been set up for Sandi to help with medical expenses and Lewis said whatever is left over will be used to start a foundation in her honor for other local horses that may be experiencing similar challenges. To donate to Sandi’s GoFundMe, visit www.gofundme.com and search “Horse: Miracle 62 day Preemie Filly.”